Yamaha launched the Arius series at the beginning of 2019 with the quality of an affordable pianos call as the YDP series. This series they made special for pianists or musicians at beginner-level and intermediate-level players. As we know, Yamaha becomes popular with the best sound and quality pianos. That is why the YDP series is a must-have piano they should have.

There is no doubt about the build quality from Yamaha. Comes with the YDP series, they provide the YDP 103 and YDP 144 with digital piano concepts. This time we will give you a deeper review of them. After that, we can decide which one is the most suitable of YDP series for you. 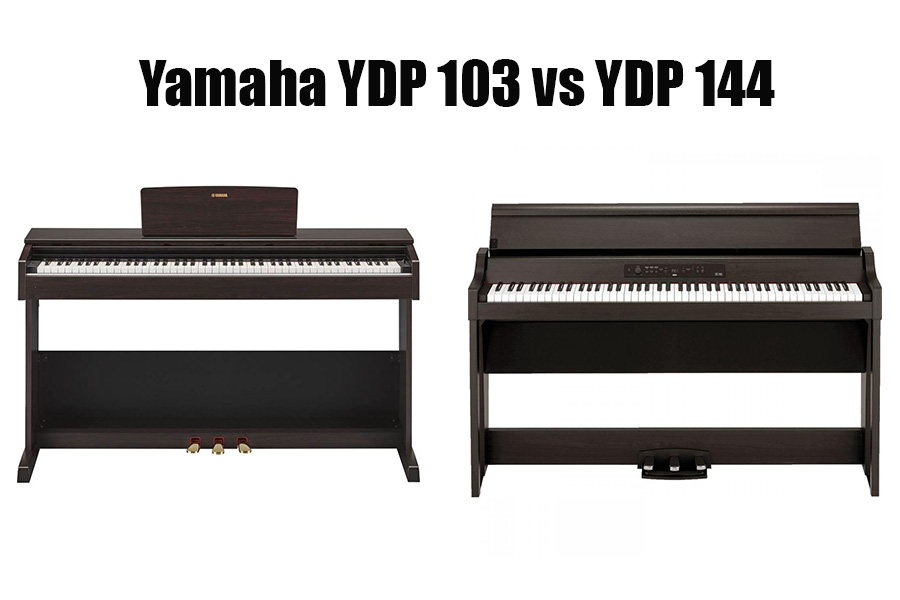 The Yamaha YDP 103 comes with a simple design that almost similar to Yamaha P45 series. It comes with a beautiful bench, pedals, base, and keyboards. It offers a digital piano type which makes the YDP 103 completes by a lot of features. It has a standard assembly with a traditional design. Read also: Yamaha CP73 vs CP88.

The pedals come from the Yamaha YDP 103 have three pedals and the damper pedal supports the half-pedal operation perfectly. It makes the easier way to gradually change the amount of sustain as you want. The material matches perfectly with all of the pedals and makes it sturdier than any other pianos.

The YDP 103 from Yamaha completes with two buttons and knobs volume. These control elements are helpful to optimize the function of it. The way to use the function’s button is pretty simple.  You only need to press it to access the piano then all of the functions and features will work perfectly.

The keys offer from the Yamaha YDP 103 have 88 keys features that have a fully weighted-touch in a sensitive way. The Graded Hammer Standard already features on its keyboard. The action is strongly perfect for a digital piano in the Arius series. This means the piano has a hammer’s strength to stimulate the real piano sounds which are so good to play.

The touch-sensitive response from the Yamaha YDP 103 provides an excellent touch. It matches with the volume setting that you can change in a soft or hard sound. To adjust the sensitivity key you need to preset the setting. Four types of touch sensitivity levels come with fixed, hard, soft, and medium. 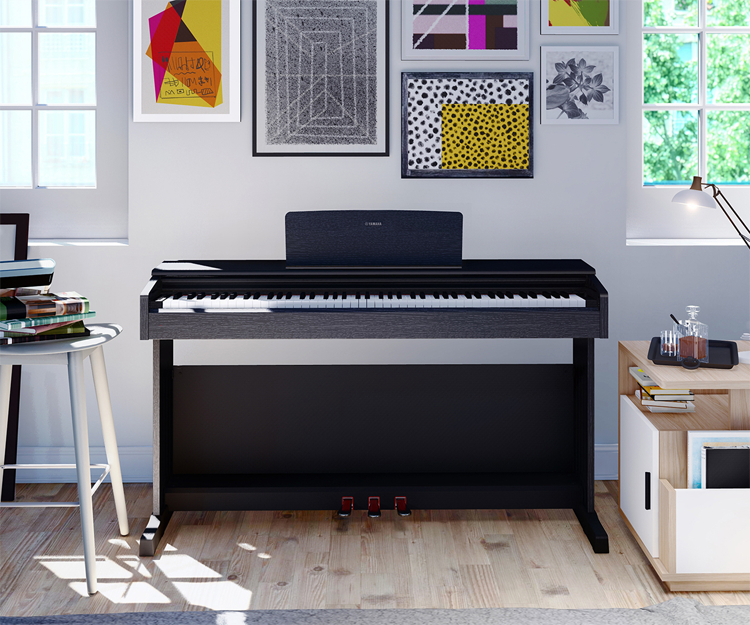 The sound comes from the Yamaha YDP 103 has a clear and natural sound. It has AWM stereo sampling with 10 sounds of pianos that make the sound brighter than any other pianos. The speaker has 12W of output with two sizes of speakers in a 12 x 6 cm. The minimum polyphony already built on its and available up to 64 notes.

The connectivity comes from the Yamaha YDP 103 is the USB to host, 2 headphones jack, and sustain pedal jack. The size of the Yamaha YDP 103 comes with a weight lighter size in a 53.4 x 16.6 x 32 inches and 82 lbs of weight. The price is reasonable with these complete features to start at US$899.99 in Amazon.

The Yamaha YDP 144 design certainly an upgrade from the YDP 143 series. It has a woody specific design that has a prettier look. It has a stereo built inside makes it perfect for home base practice. Comes with three color choices with black, rosewood, and white with a woody pattern make them perfect for you.

The sturdy design is perfect for home and it will match with every detail type of your home. That because the slimmer offering comes from the Yamaha YDP 144 and you will not bother the place when buying this Yamaha YDP 144. Comes with a digital pianos style make it easier to use at home.

The pedals come from the Yamaha YDP 144 comes with soft, sostenuto, and damper pedals feature. Tha damper supports a half-pedaling type so you can get more realistic playing even if you play at home. To make it more perfect, you can easily adjust the sounds with the volume knob. 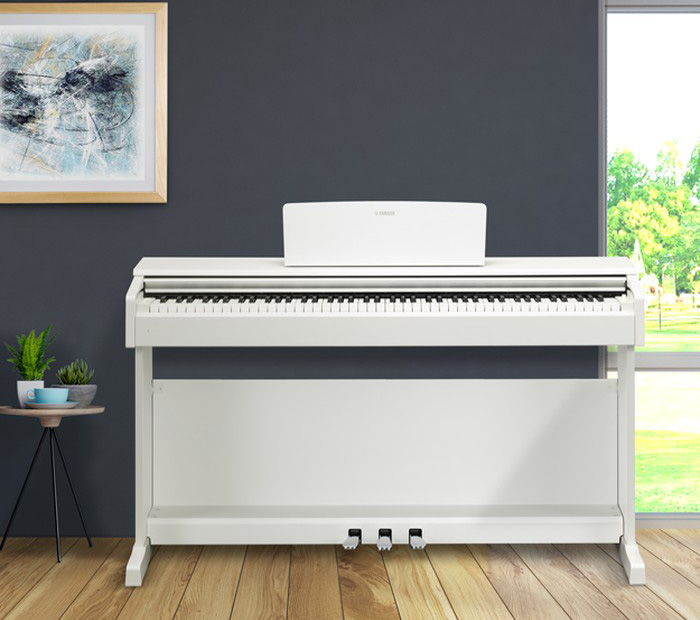 The key from the Yamaha YDP 144 has 88 keys featured by the Yamaha key action in a Graded Hammer Standard (GHS) system. It has a full size and weighted keys so that perfect to give you a different experience while playing it. The sound is incredibly perfect right after you press the keys that come from a lower-end to the high-end sounds.

The sound from the Yamaha YDP 144 offers up to 10 sounds with 3 variations of the CFX concert grand, 2 electric pianos, 2 organs, an orchestral string ensemble, the vibraphone, and harpsichord. These sounds make it a clearer output sound and a natural voice to hear. The dynamic of subtle nuance will you hear while you play the piano.

The connection of the Yamaha YDP 144 offers a USB-Midi, two ¼” stereo jacks that design for headphones. The dimension is 53.4 x 16.6 x 32 inches and 83.7 lbs of weight. With these sizes and completes features, the Yamaha YDP 144’s price start from US$ 1,090 sells on Amazon. Pretty massive to get this piano at your home.

Which One Do You Prefer?